I’ve been working on the app more than my recent lack of blog entries indicates. At this point, I have what could roughly be called a beta version; almost all the features are there, and things seem to be generally working pretty well.

The biggest change in the UX is the ability to add tasting notes, date tasted, and location tasted. This is a new screen accessible from the main entry screen. The most obvious way to do this in my mind, was a big button at the bottom: 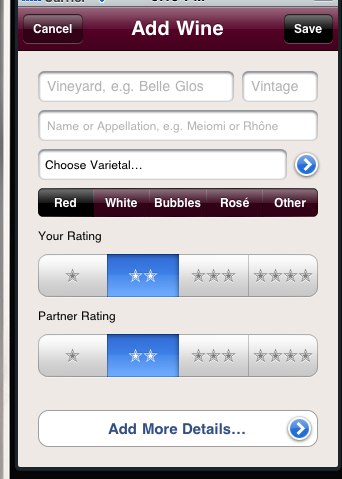 In designing the new screen, the “where tasted” and “when tasted” were straightforward; I used stock controls. For the tasting notes, I needed a UITextView, which is akin to an HTML TEXTAREA. The visual appearance of this control is pretty lacking compared to the UITextField; there is no nice beveled edge, no rounded corners, and no placeholder text. I really just wanted a multi-line field much like the UITextField, but there is nothing available to create that.

So, I hacked something together.

An option for the UITextField’s appearance is to have a beveled edge with square corners. In this configuration, you can adjust the height of the text field. So, I placed such a field on the screen and sized it about the size of my tasting notes field and made the background color white. I then put the tasting notes field on top of it, with a clear background color, and, well, it looked pretty good: 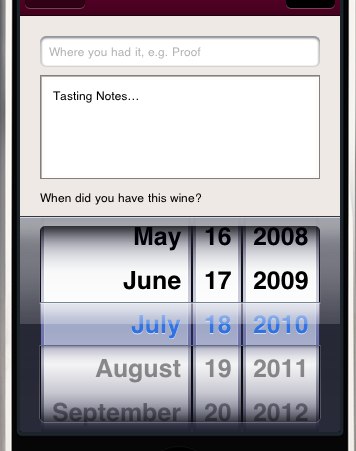 I then implemented some UITextViewDelegate methods to give the apperance of placeholder text:

I considered using some third-party controls that mimic this behavior, but didn’t want to get side-tracked adding new frameworks to my app at this point.

Once I had this, I handed my phone to Amy for some more user testing; She brought up a few obvious things that I had completely internalized and begun ignoring:

The problem with the “Choose Varietal” control had bugged me, too, but I got used to it and didn’t think about it. The solution was very simple, though hacky. I placed a clear button on top of the field the exact size of the field and had it trigger the same action as the blue disclosure button. Problem solved.

As to maintaining the list up on Google Docs, I think I may need to implement this sooner rather than later; I think it’s important to be able to get your data out of an application, and Google Docs is a reasonably user-friendly way to do it (as opposed to emailing some CSV file).

I still didn’t get around to setting up iCuke for testing; I really should because I don’t know what missing retain calls might be lurking. I also finally created an icon, using a picture I took in Napa. Not sure I like it, but it beats the white blob:

(Taken from my original).

Finally, the app no longer starts up on the actual device. A seemingly serious problem that I assume would be remedied by a re-install from scratch, however I have a few wines that I’ve added and don’t particularly wanted to lose them. Not sure how I could gain access to the SQL database to get them out, but I’m currently downloading the 4.0.1 update for my phone and the 2+ GB SDK update (!).

As a followup, I had to re-install the application from scratch, though I was able to access the SQLite database from an iTunes backup. I *really* need to implement a quicker backup/export mechanism…